Our surfboat crews dominated over in the West.

An amazing season was punctuated with an even more amazing Australian titles campaign with six crews representing Lorne at Scarborough Beach. Crews travelled West with genuine hope and anticipation. All crews performed to a level that is fast becoming a trademark of the Lorne Surfboat team.

With the threat of dangerous seas being forecast for Sunday, typically finals day, the race program was shortened to make sure that all medals would be contested by Saturday evening. This meant that our remaining 5 crews had to roll out their best performances in every round with harsh cuts and eliminations now on the program.

Our Reserve Grade rowers were standouts through the heats with the WASAVICS dominating the men’s division and the LorneAtics and UniLornes accruing near top points in the females.

All three crews raced through to semi-finals and were hopeful of progressing to the medals rounds when Mother Nature chose to halt their passage. As is often the case with surfboat rowing, the tricky conditions particularly the shore break impacted upon the crews and they failed to progress.

Nevertheless, it was an amazing achievement by these crews reflected in their national rankings for the season.

National Rankings for the Reserve Men and Women:

Our Open Men and Open Women were equally as impressive.  Our Men, Lorne 31s, were virtually unstoppable in the heats and were real contenders to make the final.  In a semifinal of four boats they were hit by a wave that saw them take water and as a result, put them behind the rest of the field.  An unbelievable row brought them back into contention, only to miss the inshore run and place them in fourth.

Our Open Women, Lorne Edge were again a standout! Their form through the heats showed they were never going to miss the final.  Living up to expectations the girls lined up for the Open Women’s final with a great attitude, spirit and confidence, knowing that they deserved to be there. 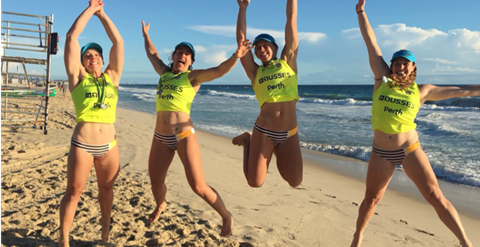 The  process of their race was as perfect as I have experienced as a sweep and full credit to the girls for delivering on the biggest stage.  A magnificent start saw them hit the lead and hold that position for the whole race, bar perhaps the final two strokes.  Pushing to the shore in dead water and virtually bouncing over a rebounding shore break they were tipped for the Gold by Northcliffe who had the assistance of an inshore run that brought them up from two lengths behind.

An absolutely incredible achievement to win SILVER and an extremely proud moment for the girls and all our supporters who travelled West and in particular me, their Sweep.

National Rankings for the Open Men and Women:

It was an enormous effort from everyone, towing boats, lifting boats, supporting each other and sharing celebrations. We have a fantastic group of people who operate as a real team allowing us to achieve what we have this year.  To have five crews ranked inside the top 12 in Australia is unheard of, particularly from a Victorian Club.  We now have National Gold on our horizon and look forward to next season with even more vigour and determination.