The Aussies were back up in the Gold Coast for 2019 and Lorne had a good representation over the week of competition.  Our Youth team were first to tackle bigger surf with some great results including Harry Hay making a swim final in tough competition.  It was also great to see three of our local Lorne kids, Kai, Fraser and Juna, making the trip to represent the club.  It was over to the seniors and boats for the latter part of the week and we had Ruby McMaster represent the Surf Life Saving seniors and six boat crews battling it out which was also great to see.  In some big surf and difficult conditions our teams gave a great account of themselves and represented the club very well.  ‘Lorne Again’ came away as national champions in the Female Masters Surf Boat Race, with ‘Uni Lorne’ picking up a silver medal in the Reserve Womens Surf Boat Race.  Special mention goes to Chantal Guziak of Lorne Edge crew who competed with a broken foot and was carried to and from the boat for each race which was very inspirational.

We finished the season as 4th ranked overall Boat Team in Australia!  A mammoth achievement behind North Cronulla, South Curl Curl and Palm Beach who are clubs that field multiple boat crews across all age and grade divisions.

The Lorne Mowers Reserve Men, The Lorne Dry Reserve Men and the Lorne Edge Open Women all rowed through to semi-finals (among the top 12 crews in the country in each division) and were unlucky not to be in contention for finals medals.

The Lorne Agains Masters Women’s crew won Gold in the Masters Final.  Two fearless and fit members of that crew, Paula Matthews and Joukje Siebenga backed up their Masters campaign bruised and battered to win the silver medal in the Reserve Women Australian Final alongside Georgina Box and Shea Grant (with none other than Geoff at the helm).

The boat team sincerely thank their awesome leader Geoff Matthews for his dedication to, and belief in all his rowers and the enduring support, on and off the beach, from Jamie Robertson, Frank Veltman, Tamara Brawn, Marty Guerow, Alistair McCombe and Jay Parkin. 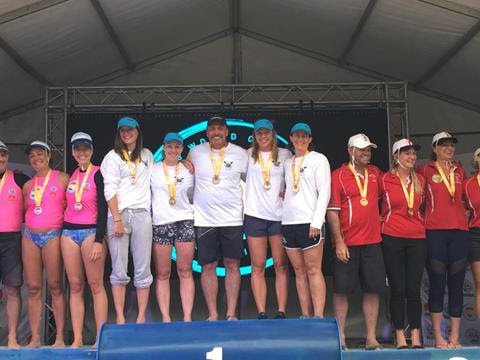